You are here: Home / How To / How to Get Rid of Pokeweed

Weeds have a way of growing even in areas where you think it wouldn’t be possible. Many gardeners have felt the frustration of trying to grow plants only to find their gardens overtaken by weeds. One of the hardiest and most common forms of weeds is pokeweed. In addition to being a nuisance to native and non-native plants, pokeweed is also poisonous, so you must get rid of it as soon as you see signs.

Use any or all of these methods to get rid of pokeweed:

It is very important to be careful and use the proper protection when getting rid of pokeweed and choose times when the pokeweed will be easier to remove. Read on for more details on properly and effectively rid your yard of pokeweed.

Use the Proper Equipment

Before you get started on removing the pokeweed in your yard, whichever method you choose, it is very important to have the proper gear and the right equipment.

In terms of clothing, you should ensure all your skin is completely covered, as exposure to the pokeweed can cause rashes or potentially have toxins from the pokeweed move through your skin and into your bloodstream. The proper clothing should include the following:

For the equipment you need to get rid of the pokeweed effectively, it is best to have all of the following:

If the pokeweed is young and small, it is probably the easiest and simplest to remove. If possible, wait until after it has rained as the soil becomes loose and it becomes easier to remove the plant.

To pull young plants out, firmly grasp (with gloved hands) at the base of the plant and pull it out. Do not pull from the top of the pokeweed, as it will just cause the plant to tear but leave the majority of the plant in place.

Once you have pulled the plant out, put it directly into a garbage bag. Alternatively, you can put it in a wheelbarrow to be laid out in an area without soil.

Get Rid of the Pokeweeds’ Taproot

The most effective way of making sure the pokeweed doesn’t come back is by digging up the taproot. Once again, it will be an easier endeavor if you can wait until after it rains, as the soil will be looser and easier to dig up.

Using all the protective gear you would use pulling up young plants or when applying herbicide, do the following:

After the root has been separated from the rest of the soil, put it in an area where it can dry out and has no chance to grow again, then refill the hole.

If you decide to go the cutting route, be aware that you will need to cut the pokeweed down repeatedly. It will eventually stop growing back, but it may take a while, so you must be patient and consistent.

If you decide to use herbicide, there are two ways to go about it. Once again, put on the proper protective gear (most importantly goggles) and do the following:

There are several ways to get rid of pokeweed. The two main ways are by pulling up young plants by the base of the plant, making sure the root comes up with it. The second way is to dig down into the ground and pull the plant out by its taproot. With either option, it is important to use a soil screen and separate the roots and berries from the soil, and then place them in an area where they can dry out, die, and not take root again.

A couple of other ways to get rid of pokeweed include repeatedly cutting it down with sheers or a lawnmower or applying herbicide. When you use herbicide, you can apply it to the leaves or sheer off some of the plants first and apply the herbicide on the cut ends.

Whichever method you choose, be aware that it will likely take a combination of all of the above solutions to completely get rid of pokeweed.

Be sure to checkout our other articles you may find useful like, how to cut really tall grass, how to get rid of monkey grass, and what black spots on maple leaves mean. 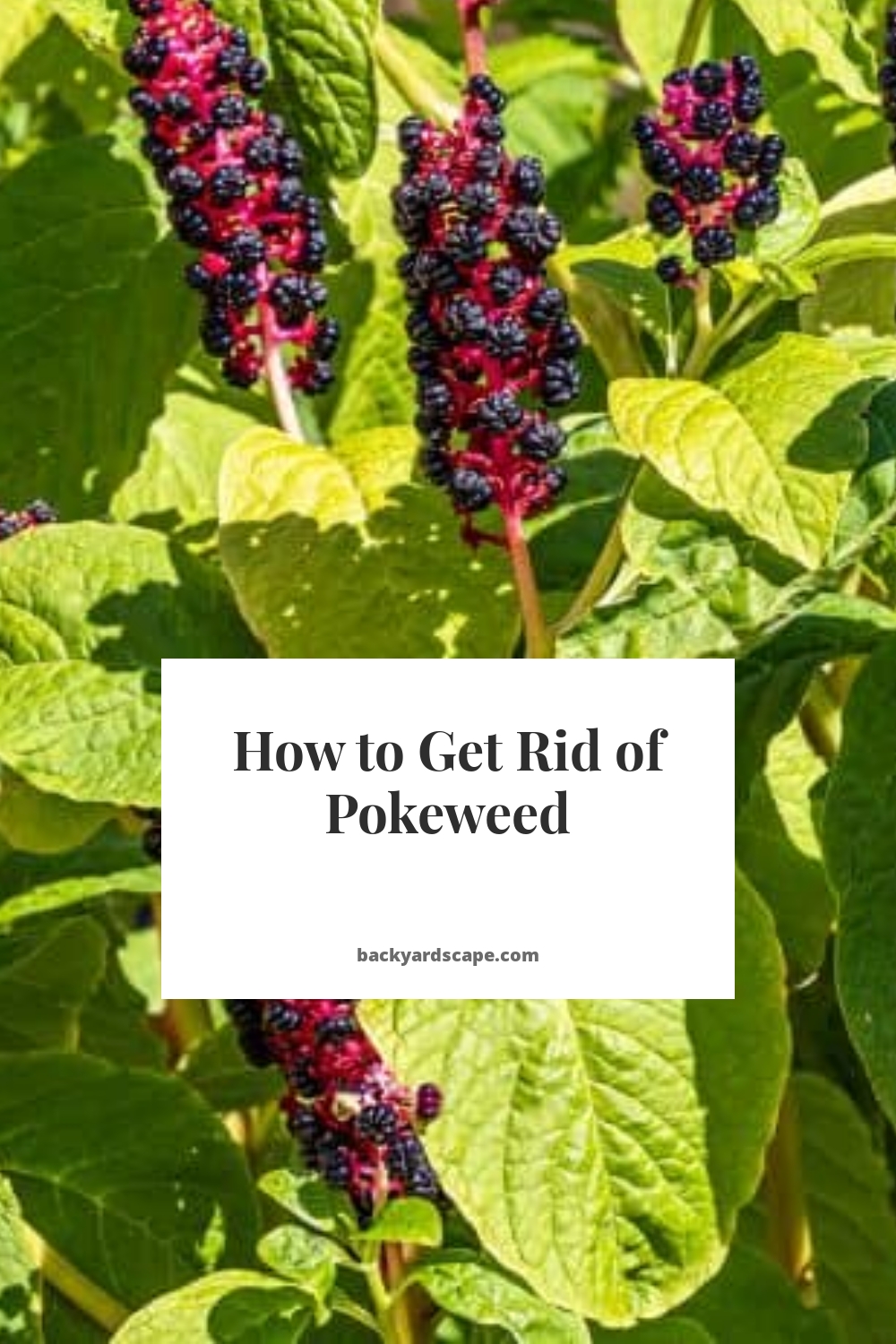