You are here: Home / Animals / Where Do Raccoons Go During the Day? 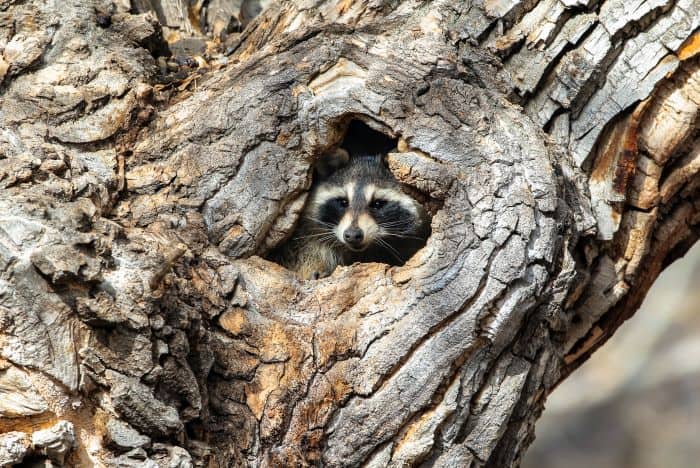 Ah, raccoons. The stealthy, nighttime raider of our plants, gardens, trash—you name it. These omnivores can wreak havoc on our properties while we sleep, leaving us left unable to do anything but deal the remains when we awaken. However, one mystery remains—where on earth do these creatures run off to during the day?

Raccoons are nocturnal creatures; therefore, they choose to rest and sleep in various dens in forests, in places such as the hollows of trees or inside logs during the day.

That said, there’s more to the question. Raccoons don’t tend to stay in the same place, and if you live in an urban area, they certainly aren’t making the trip to the city from the closest forest.

Let’s keep reading to find out more about what raccoons are really up to during the daytime and the steps you can take to keep your property safe from raccoon damage at all times of the day.

Where Do Raccoons Go During Daytime?

These nocturnal creatures are quite elusive. It can be hard to actually spot one, prompting many people to wonder where they run off to during the day. Well, raccoons are forest and brush animals; their natural habitat is a dense forest with a source of water nearby. Outside of those constraints, they aren’t so picky.

During the day, you’ll likely find raccoons in forests, although they may choose to live in various places, such as in the hollows of trees or hollow logs, or even in the thick brush by water. If you live in an urban area with a lack of forest, raccoons may have made dens by dumpsters or drains.

As the sun begins to set, raccoons will slowly start to come out of their dens in search of food and forage throughout the night (which very well may include your backyard.) After a long night of hard work searching for food, they return to their dens at sunrise to rest and start the cycle again the next day.

However, while a rare sight, raccoons have indeed been spotted out and about during the daytime. There are three main scenarios in which you may find a raccoon outside during the day:

So, aside from these three circumstances, these sneaky creatures seem to disappear after wreaking havoc on your property during the night. After foraging in the dark, most will return to their dens to rest!

However, it’s not like you can catch them in the act in the middle of the night and shoo them away—after all, humans have to sleep, too! So, let’s check out some helpful ways you can keep raccoons from damaging your property, no matter what time of day it is.

How Can I Keep Raccoons Away?

Perhaps you’re searching for information on where raccoons go during the day because you’ve experienced the damage caused by raccoons to your yard or trash cans during the night firsthand.

Thankfully, there are several ways you can protect your yard or garden from these sneaky foragers—even while you sleep. Let’s take a look at the best steps you can take to keep your garden safe from your neighborhood raccoons:

Several spices are known to repel raccoons. Among these, two of the strongest deterrents include garlic and chili powder.

Try mixing crushed garlic, chili powder, and dish soap with water in a spray bottle and spraying it on parts of your yard you want raccoons to avoid. This will help keep the raccoons from meandering around these areas.

Popular Stories Right now
7 Ways on How To Hang String Lights in Backyard Without Trees
Can a Hot Tub Sit on Gravel? (And Why to Use It)
What to Feed Squirrels in Backyard

Raccoons feel most comfortable sneaking a bite from your home when they’re sure there’s nobody around to see them do it. Therefore, by imitating the actions of humans, you can trick the raccoon into thinking your home is not a safe place to scavenge.

Try leaving a radio on outside and keeping lights on overnight. The combination of noise and lights might make the raccoons believe there is human activity, causing them to avoid your property.

Raccoons have incredible senses. If your dog food is left sitting out, or your trash cans are not secure, they’re likely to pick up on that scent and find their way to it. Therefore, you can prevent them from coming by eliminating the things they’re attracted to.

Remove dog food, bird feed, and any other kind of animal food from your yard and put it in your garage instead. Trash cans should have lids that lock tight, preventing raccoons from both smelling the trash and having access to it.

Put an Electric Fence Around Your Yard or Garden

Raccoons are very agile creatures and are capable of climbing lots of things, including trees! Therefore, if you’re considering using a fence to keep raccoons away from your property, be sure that it’s an electric fence. Most recommend a low, two-wire fence for keeping out raccoons in particular.

Raccoons are nocturnal creatures, and the majority of them can be found resting in their hollow dens in trees and logs in forests or makeshift dens in drains in the city. If you’re dealing with damage caused by raccoons during the nighttime, don’t feel helpless when they disappear during the day.

By removing things like pet food and securing your trash cans, you can remove temptations that attract raccoons to your property. You can also spray a garlic/chili powder solution on your yard or imitate human activity through radio and lights to scare them off. 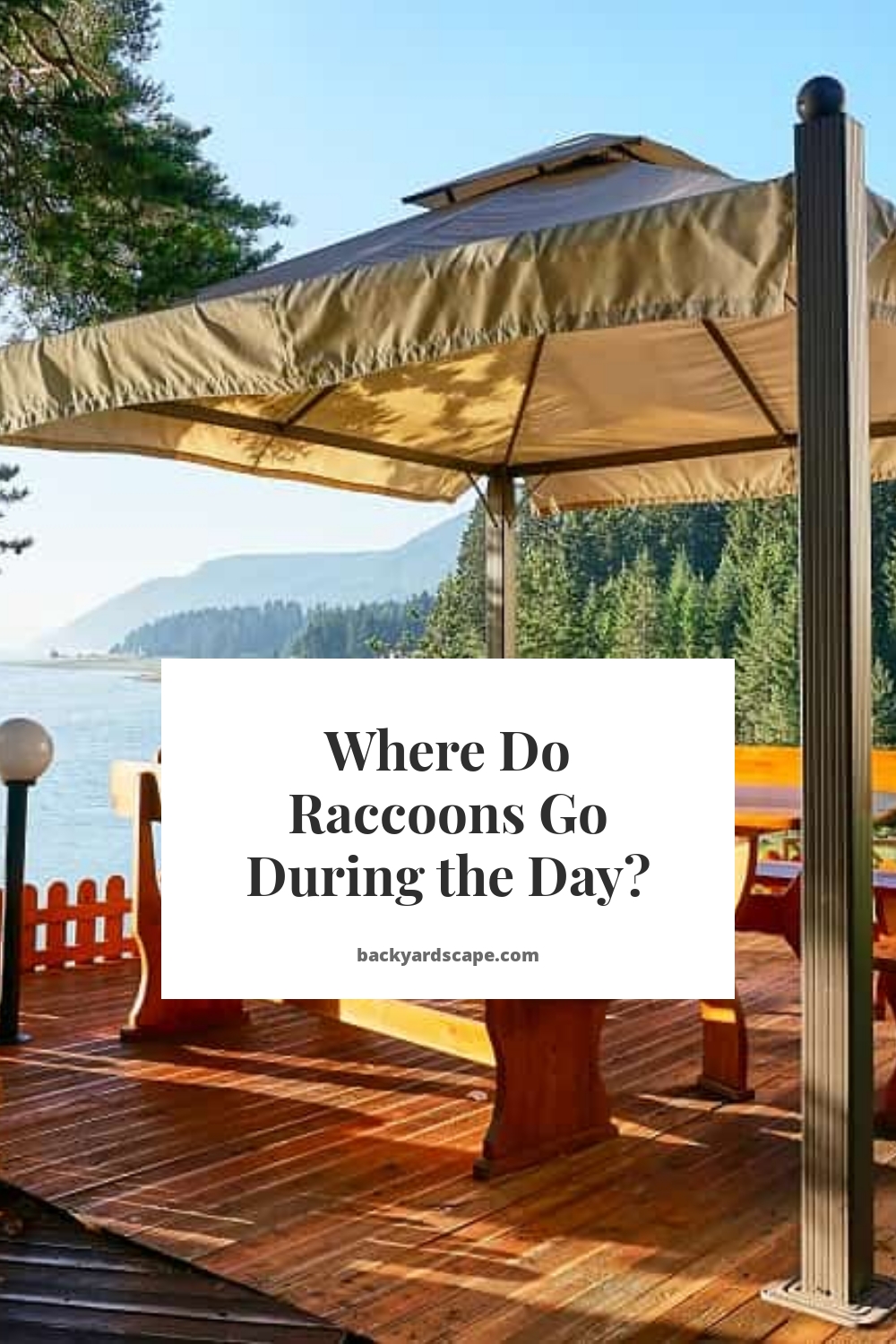 This site uses Akismet to reduce spam. Learn how your comment data is processed.

Hey There. Thanks for stopping by. You're probably wondering who in the world is writing all about backyards. We're Jena and Christina.  Our friends call us the Inas and now you can … END_OF_DOCUMENT_TOKEN_TO_BE_REPLACED