You are here: Home / Wind Chimes / Koshi Chimes: What Are They, How to Hang Them, and More

When you step into a spa, you often hear enchanting chimes and soft ocean waves.  In movies and television, when someone is reminiscing about the past you are brought back by the sounds of whimsical chimes and transported to another time.  These chimes in the music you hear could quite likely be a set of soothing Koshi chimes.

Koshi chimes are made by an inventor and musician known as Kabir. Koshi chime sets are designed around the four elements: earth, water, air, and fire. The chimes produce a circular sound and are said to have spiritual healing and other beneficial abilities.

Want to buy them? Get them here

A single Koshi chime is not complete on its own, however.  Keep reading to learn about the four element inspired set of Koshi chimes.

What Are Koshi Chimes?

Kabir, the maker of Koshi chimes, lives in Le Soler, France.  Le Soler is a commune located at the base of the Pyrenees Mountains in southern France.

Previously, the makers of Koshi crafted a similar chime called the Shanti.  While production has stopped on the Shanti chime since 2009, the workshop improved on their design to make the Koshi chime.

These chimes have hollow cylindrical bodies which are made from bamboo veneer and treated with natural oils to allow a rustic style.  The inside has a steel layer for the clapper to hit and resonate.

Each chime has eight cords with steel pins inside, with each pin meticulously tuned.  When the chimes are played by hand or by wind, the harmonies of the notes create a soothing musical sound.  Kabir describes the sound as “circular” on the official Koshi website, as the notes seem to build and fade.

The Four Elements Of Koshi Chimes

There are four chimes in a set which are associated with the four elements:

Each element is assigned to a particular set of notes, a chord which produces a harmony and overtones unique to that particular chime.  When the chimes are all played as a set, they produce a beautiful harmony in unison. As the main tones fade, the overtones become more prevalent, which produces the circular sound.

Each element is focused on different aspects of spiritual healing.

When played together, an inner peace comes over the body- light, uplifting, and energetic.

The History Of Koshi Chimes

The thought of chimes usually conjures up a vision of Asian temples and pagodas in the mountains.  While chimes are audibly soothing, they are also believed to keep evil spirits and misfortune away while attracting good spirits and good fortune.

The Chinese are recorded to have been casting chimes as early as 1100 BC.  According to the McLerran Journal, chimes made their way to Europe and the Americas in the mid 1800s as Japan opened shipping ports to the western world.

Kabir, a musician, invented the Shanti chime and recorded its sounds in 1992.  After 17 years, the Shanti had gained much recognition in the world music sphere. Kabir then designed the Koshi chimes slightly larger, with bamboo veneer rather than metal only shells.

What Are The Benefits of Koshi Chimes?

While there are many theories on why the sounds of chimes are soothing, one is obvious. The chimes drown out harsh sounds of the world.  A busy road near the yard, a noisy neighbor, or a dog barking can be drowned out. A set of four can provide a dramatic and harmonious sound background to any outdoor space.

Sound healing is also a benefit of using wind chimes.  For example, Koshi chimes are tuned to the four elements, which together form specific frequencies, or specific sound wave forms.  The specific vibrations created through the sound waves are thought to release stress, relieve anxiety, and help with insomnia when absorbed by the body.

Within the methods of Feng Shui, it is recommended to hang wind chimes at the entrance to the home to lift the negative vibrations in your space and create new positive vibrations.

Hang the chimes where you want to attract positive energy.  If there are family and friend problems, hang the chimes in the living room.  If a love interest issue is at hand, the bedroom would be a recommended place to hang the Koshi chimes.

Another way these chimes are put to use is the brain wave inducing binaural beats.   While not exclusive to chimes, these recordings can help the brain change from a state of hyperactivity, such as when stressed or anxious, to a more calm or even sleep state.

When producing binaural beats, a different frequency or tone is played in each ear while using headphones, but not more than 30 hertz apart.  Both tones must be under 1000 hertz.

The brain then attempts to combine the two as it tries to make sense of the sounds, resulting in brain wave frequency synchronization, where the brain perceives the difference as a third tone.

For example, if one chime is recorded and played at 120 hertz continuously, while another at 130 hertz, the brain will perceive the difference of 10 hertz at a third tone.

These third perceived tones are the frequencies that can help to put us to sleep, help us to concentrate, or even be more productive depending on the difference in the two original frequencies used.

How Do You Hang Koshi Wind Chimes?

Like most chimes, Koshi Chimes come with a hanging mechanism at the top.  The ring at the top provides a balanced hanger so that the sound quality is not compromised.  Keeping this in mind, a good place to hang these wind chimes is someplace where the wind is likely to hit, but also out of the rain and snow.

The bamboo is treated with oil, but best to avoid water to retain superior sound quality and correct tuning.  Many choose a covered front porch, or an overhang near a window to hang their chimes.

Another option, if putting the chimes outdoors sounds unappealing, is to enjoy the Koshi Chimes indoors to be played by hand. They may be installed on hooks into the ceiling, or even on a custom built chime stand if feasible.  Koshi chimes can also be hung on the matching unfinished wood style Koshi stand if matching decor is an important factor.

Where Can I Get Koshi Chimes?

While you could fly to the French mountains to seek out Kabir and his workshop, Koshi chimes are readily available to be shipped to your door.  There are plentiful amounts of bamboo chimes online, so keep an eye out for the Koshi signature down the side.  Find them on Amazon.  If a stand is needed, find both here. 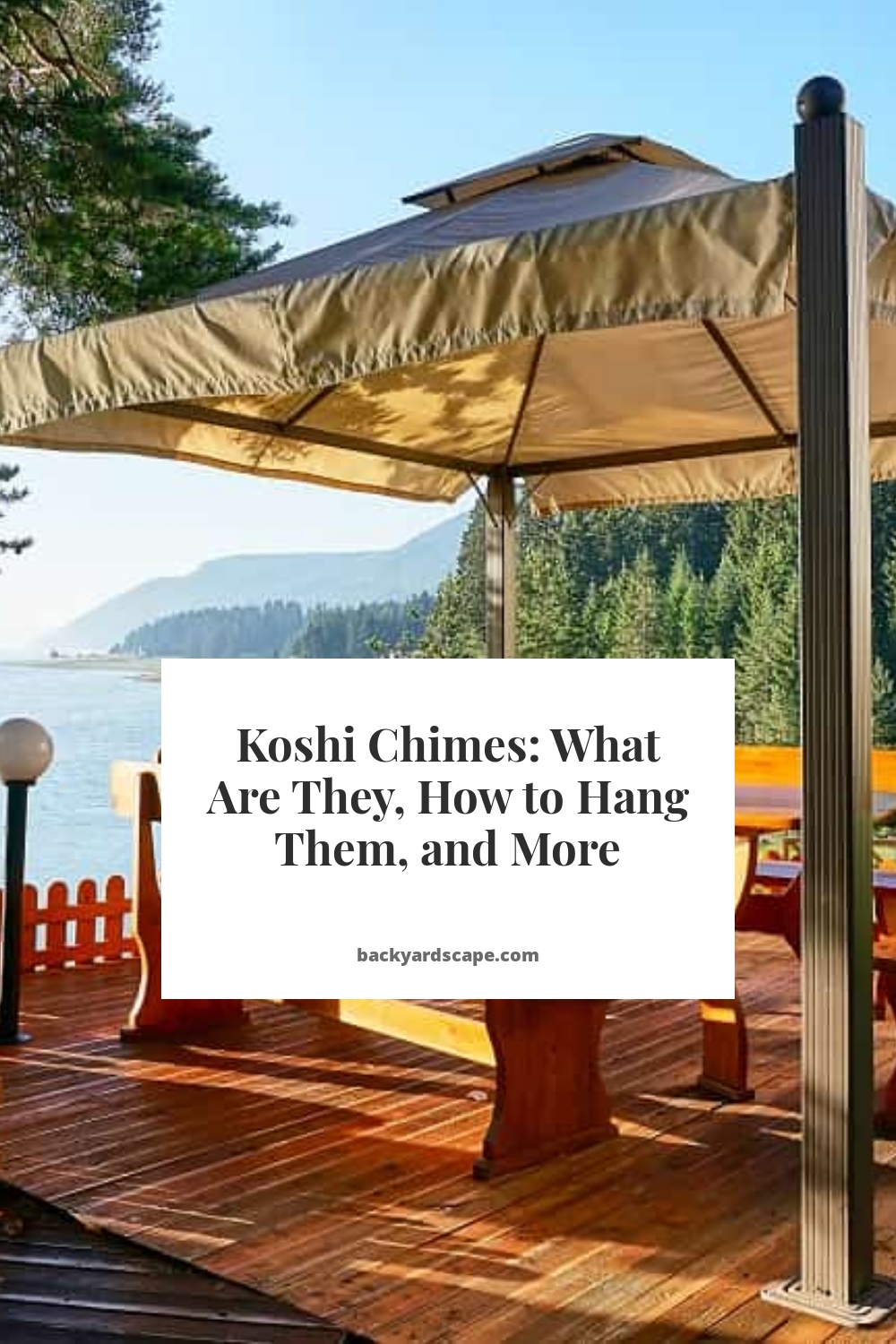