You are here: Home / DIY & Projects / How to Redeck A Trailer

Do you need to redeck your trailer before hauling your next load of gravel, mulch or wood for your next backyard project?

Utility trailers are so versatile for so many tasks. Hauling a golf cart, lawn equipment, lumber, laying mulch in your backyard, demolition materials, you name it.

After a while your trailer decking will start to look pretty bad and you’ll need to replace the boards. If you wait too long and your boards start to rot, then you’re in danger of compromising your trailer deck strength.

In this article, we’ll walk you through how to redeck your trailer.

Our trailer is a 2006 5×10 single axle open trailer. The pressure treated lumber from 2006 was starting to rot considerably. There were no through holes yet, but I didn’t want to push it any longer so I decided to redeck it.

First step is to figure out what size lumber you need and what hardware you need to connect it to the metal trailer frame.

If your boards are still intact, you can measure what size they are (width and length) and how many there are on the deck and do a one for one swap.

The boards were so badly damaged that I could barely see the screw heads that connected them to the metal frame.

To connect wood lumber to metal, you need a self tapping screw that is meant to go through wood to metal.

The side boards were connected with through bolts with washers and nuts. I used stainless steel since the previous ones were badly rusted.

The size was ¼ thick, hex head 1 ½ long bolts. Now that you know what you need, pick everything up from the local lumber store.

This video showcases how we redecked our utility trailer.

Now that you have the lumber and hardware, you’re ready to demo the old boards off your trailer. Depending on how bad they are will determine how much work it will be to get them separated from the metal frame.

The side boards came off easy with two wrenches. If yours is rusted, spray it with PB Blaster. It seems to work better than WD-40 in my opinion.

If you can see any of the screw heads from the wood deck boards, you can try to unscrew them. I got some to unscrew but most were pretty stuck and I was using my dewalt impact driver to get enough torque to get them to budge.

I ended up using my dewalt cordless circular saw to make three passes across the boards. Make sure you look underneath to verify where the metal bars are located and if needed make a mark on the wood to note where they are.

Last thing you want to do is hit one of those as you are trying to saw through the wood. You won’t be able to cut through the entire first and last board with the circular saw but we’ll get to those last.

Now that I had 6 of the 8 boards cut through, I was able to pull the pieces off pretty easily. I used my large pry bar with a hammer to get underneath each small piece to pry the wood off the screw. The pry bar gives you enough leverage to pull the wood off, even if the screw is still attached to the metal rail.

The wood was so rotten around most of the screws that the wood boards pulled right up. I did have two pieces that would not budge so I decided to use a drill bit and drill around the screw to loosen the wood.

I made four or five holes around the screws and finally the boards came loose. For the last two boards, I pried on the inside of the board all around and they both finally came free.

Now that you have all the wood off the trailer, you need to knock down the screw heads still embedded into the metal frame.

At first I used the angle grinder but that was taking too long so I took my hammer and hit the side of each screw several times and they broke at the same height of the metal frame.

If any of them broke with a little bit sticking up, I hammered it down flush with the metal.

You’re now ready to clean up your bottom metal frame before you put the new boards back on.

I used a metal wire brush attached to my drill to clean up all around the bottom metal paying attention to any rust. My metal frame was in good condition other than some surface rust and dirt and debris.

Once I was done with the wire brush, I used my blow gun sprayer with my compressor to blow out any remaining debris or dust.

I used a flat black Rustoleum spray to go over all exposed metal. The metal frame looked almost new after the Rustoleum application. Let it dry and you’re ready to install the deck boards.

Next step is to install the deck boards. My trailer had an angle iron lip on top and bottom and measured a little over 120”.

That meant I didn’t have to cut any of my 120” long boards. The lip was over an inch on each side which kept the boards securely on the trailer but would make it extremely difficult to get the last three boards in.

The first five boards were easily slid underneath the lip by angeling them and then tapping them to the sides with a rubber mallet since I didn’t want to mar the wood boards.

Then I realized I couldn’t angle the boards anymore to get under the lip. I had to call a friend with a hydraulic jack. Essentially we had to bow the boards enough to get each end under the metal lip.

The safest way to do this is to jack up the board from underneath the trailer. The problem is that most jacks don’t go that high by themselves so you need to add some wood to the jack to lift the board high enough to bend it under the lip.

Note: Be careful when you’re bending the decking under the metal lip. As you can see from pic below I was standing on the end of the board to get it under the lip. If you’re not careful, you can fall off the trailer injuring yourself.

Once the board is under the lip on each end, release the jack and the board will come down. On the last board, just make sure whatever board you use on top of the jack is less than 7” wide so that it doesn’t get stuck in between the jack and the trailer deck.

Once that last board goes down, stand back and admire the new deck boards on your trailer.

If you have side and end boards on your trailer, install the end boards first. Start with the bottom, verify the diameter of the hole in the metal frame then use the same drill bit to go through the wood board.

Screwing the Decking to Metal

Last step is to screw through the deck boards to the metal frame below. This was the most difficult part of the whole job, minus the hydraulic jacking the last three boards. If there is any spacing between all your boards, try to get the spacing even all the way across by using shims to hold the boards in place.

Once they’re set where you want them, install the self tapping screw through the wood and into the metal frame. I used my impact driver to give me more torque to get through the metal.

Unfortunately the screw head is phillips so if you’re not holding it tight, your bit will slip and strip the head. After about 30 minutes and only getting in three screws, I decided to start predilling a pilot hole for the metal so that my screw had something to catch on.

I used a smaller titanium drill bit to go through the metal. I actually bought several bits since they dulled out quickly but with the predrilled hole, the screw went in much faster. The predrilling took about a half hour and the screws went in less than 15 minutes.

In hindsight and after drilling through other metal in different projects, I discovered cobalt drill bits. They are much better for metal and will last longer than the titanium bits.

You’re now done re-decking your trailer. In all I believe this took 5-6 hours and the total costs were $100. 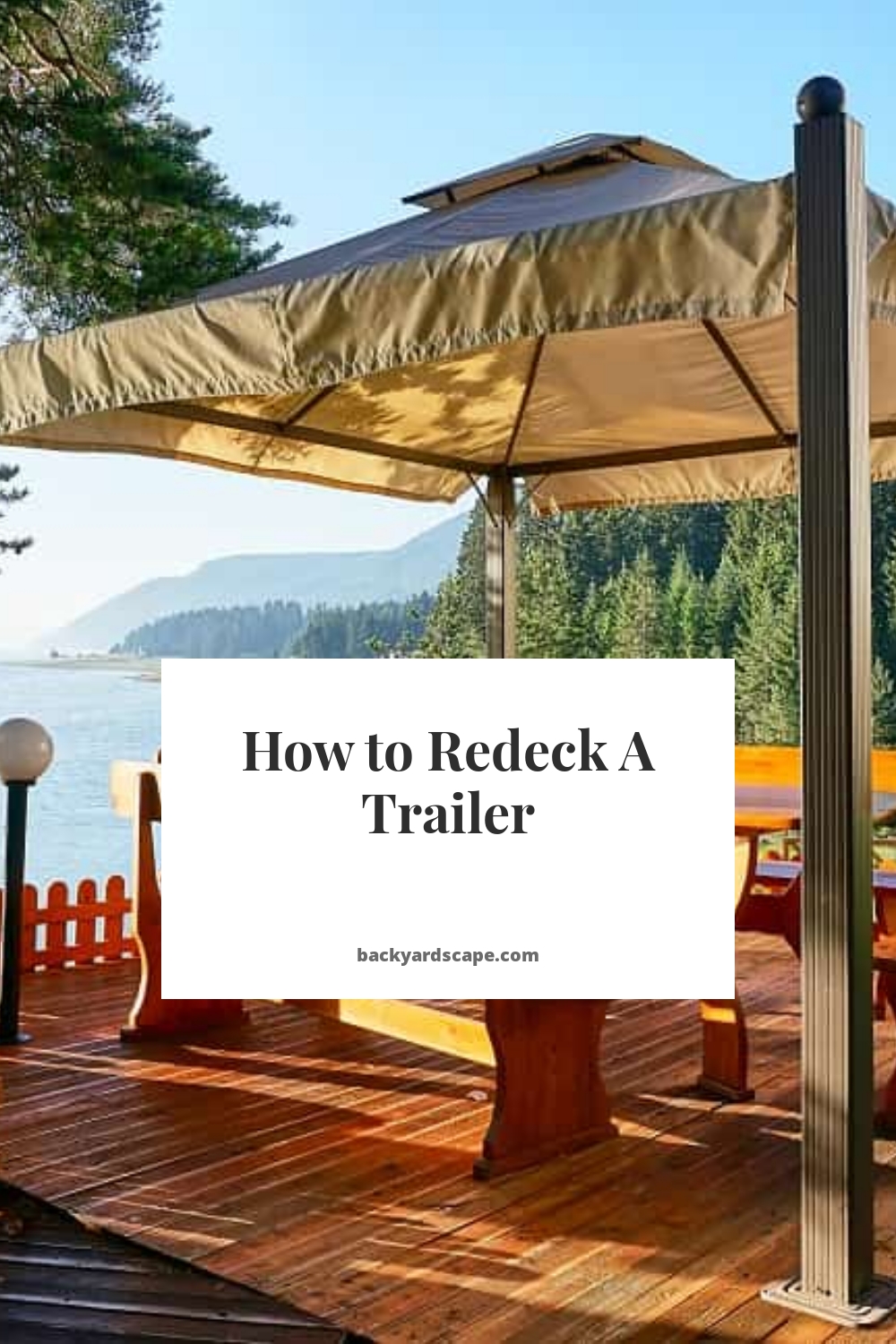