You are here: Home / Fire Pits / How To Reduce Fire Pit Smoke (The Right Way)

Imagine this: you’re sitting around the fire with your friends having a great time. The wind unexpectedly changes direction, and you get a face full of smoke complete with a sharp, burning sensation in your eyes and throat.

If this sounds all too familiar, thankfully, there are a couple of easy steps to take to reduce the amount of smoke your fire pit produces. Things like the type of wood you use, how you place your logs, and even how clean your fire pit is can all contribute to excess smoke.

How Can I Reduce Fire Pit Smoke?

A fire pit is an amazing place to gather around, which is why it’s important to make sure that nobody is getting smoked like a cut of meat. Taking the necessary precautions to reduce the amount of smoke produced by your fire pit is an easy way to keep everyone comfortable, as well as making a quality fire.

Pick the Right Type of Wood

We’ve covered best materials to burn in your fire pit. On top of that, you’ll want to choose hardwood over softwood if possible because hardwoods are typically much denser, and as a result, burn longer and reach higher temperatures than softwood. Some common hardwoods that you can find include:

While softwoods can be burned, they are not preferable. Softwoods constitute the evergreen trees, like pine, spruce, and redwood, and they often have much more sap than hardwoods. Sap is an organic compound, which, is the part of the wood that produces smoke. In addition, softwoods are less dense. The large amount of space between the fibers in the wood allows for greater airflow, and consequently, a faster time to combust, and this also means that they burn for a shorter amount of time.

When selecting wood to use in your fire pit, make sure that it’s been cut, split, and dried. There are two primary methods that are used to dry fresh-cut wood. They are:

Both seasoned and kiln-dried woods should have a moisture level of under 20%, so neither provides any tangible benefit over the other in terms of use in a fire pit. It is also important that any wood you purchase is kept dry until use.  If you want, you can buy a moisture meter to ensure that your wood is suitably dry.

What Is Green Wood?

Green wood is wood that is above acceptable moisture levels, typically falling between 30-40%. This makes it much more difficult for the wood to burn, and in turn, leads to a ton of smoke. The large amount of water in the wood requires much more energy to burn off than properly dried wood.

You should avoid using green wood in your fire pit whenever possible. If you have to burn green wood, follow these tips to reduce the amount of smoke produced.

Can I Dry My Own Wood?

If you’ve recently chopped down that pesky tree in your backyard, you may be wondering how to properly prepare it for use in a fire pit.

You can both season and kiln-dry wood at home. Seasoning takes much longer, but is more hands-off, while kiln-drying is much more labor-intensive and requires some specialized equipment and structures. Therefore, we recommend seasoning wood at home, though those with a DIY mindset might enjoy taking a crack at kiln-drying.

How To Tell If Wood Is Dry Enough

Even though you are using the wood in an outdoor fire pit, you should look for wood that is suitable for even indoor use due to the fact that this wood will not smoke, or smoke very little. When comparing green wood to dried wood, there are a few key characteristics that differ between them.

In general, choose dried wood that has:

The secret to cultivating a great fire lies in creating a structure that allows for adequate airflow. Ask ten different people how to do this, and you will likely receive ten different answers. Building a fire is not an exact science, but there are a few key concepts to keep in mind.

In the context of a fire pit, these amount to airflow, a lighter/matches, and wood, respectively. Remove any of these three, and any fire will cease to be. You will most likely have enough wood and matches for your fire, so ensuring that your fire is receiving an adequate amount of airflow is vital to making sure that your wood has enough oxygen to ignite with minimal smoking.

A fire consumes three types of fuel: tinder, kindling, and wood, in that order. Tinder is what ‘jump starts’ the fire; it is any material that quickly and easily burns.

Some examples of tinder:

Make sure that you don’t light any tinder without enough kindling nearby to sustain the flame. Kindling is comprised of larger materials that, while also easy to ignite, remain ablaze for a longer time than tinder.

Some examples of kindling:

Once you have gathered your tinder and kindling, you’ll want to place it in the center of your fire pit so you can start your fire.. The last step before lighting your fire is to create a structure with your wood. You can create any structure you wish so long as it has enough space between wood pieces for a good amount of airflow.

Let us know in the comments below if you’d like to see a video comparing these campfire structures and which one works best.

After putting your fire out, you may find that there is some debris leftover. Try and clean this out often, as an accumulation of ash and embers can negatively impact your fires in the future.

These materials don’t burn. Therefore, they will increase the time it takes for other materials to heat up to the point of ignition, causing the prolonged release of smoke.

What Not To Put In A Fire

At each stage, a fire requires different materials, namely tinder, kindling, and wood, as fuel. For example, you shouldn’t introduce tinder into a fire that’s already burning through the wood, and forgetting this will cause your fire to smoke more than you’d like. So, once you have that perfect fire roaring, try and avoid adding in materials such as:

In addition to producing lots of smoke, these next materials are things that you should never, ever, put into a fire. They emit toxic gases harmful to both you and the environment, and burning some of them is often illegal for some fire pit regulations.

Should I Get a Smokeless Fire Pit?

A smokeless fire pit can be a great way to eliminate all of the hassles that come with properly setting up a traditional fire pit. There are many large smokeless fire pits available made specifically for backyard use.

Their secret lies in the ability to precisely control airflow and temperature, practically eliminating all of the problems that lead to smoke in traditional fire pits. In addition, smokeless fire pits are much more efficient in their fuel-to-heat ratio, making it so that you don’t have to burn a whole tree whenever everyone wants to gather around the fire.

Some even eliminate the wood altogether by using propane or natural gas, though you may find yourself without the comfort of that warm cracking sound you get from burning wood.

Some of the best smokeless fire pits:

If you find yourself setting up fires everywhere you go, a portable fire pit can be a great way to quickly set up a fire no matter where you are. There are many that are basically just a container for your wood pieces, but some come with features that eliminate any and all smoke emanating from your fire, removing most of the setup time and effort. Those who already have a fire pit at home and don’t plan on going camping likely won’t benefit from a portable fire pit, but those seeking the convenience and ability to set up a fire on-the-go might want to look into one.

Portable fire pits can range from barebones aluminum structures like the Snow Peak Fireplace, to the smokeless Outland Firebowl Premium, and even the luxury rapid-burning, smokeless, Bluetooth-controlled BioLite FirePit and Grill.

Why Does Wood Smoke?

Wood is made up of four basic components:

All of these, except ash, will burn in a fire. When water and carbon are heated in the presence of oxygen, water vapor, and carbon dioxide are produced. Both are gases, but they are invisible to the human eye, so they can’t be what’s causing your fire to smoke.

So, what are these volatile organic compounds? They constitute the hydrocarbons and carbohydrates within the tree that sustain its life. Hydrocarbons are comprised of solely hydrogen and carbon, while carbohydrates also include oxygen. These compounds are volatile, which means that they evaporate when heated.

This is the visible smoke that is seen emanating from the fire once it reaches a temperature of roughly 300°F or 149°C. If the temperature keeps climbing, these compounds will eventually combust, ceasing to produce any further smoke.

This phenomenon is the reason why charcoal doesn’t smoke. To produce charcoal, wood is heated in extremely high temperatures without any oxygen. In the process, all of the organic compounds are burned away, but because there is no oxygen to react with and make carbon dioxide, the carbon in the wood remains as charcoal. And when you use it for a barbecue, the carbon is able to react with oxygen and produce a flame.

Most fire pit smoke is produced during the initial stages of the fire, due to the fact that the temperature is not high enough to quickly combust these compounds. Once you have established your fire, you should find that new wood added to the pile does not smoke for very long, if at all. Smoking only occurs as the new material is heating up to a combustible temperature, so the hotter the fire, the quicker that will happen.

The Hazards of Smoke

Aside from being uncomfortable, inhaling smoke from your fire pit can be hazardous to your health, as it contains a multitude of dangerous compounds. These include:

Those with existing respiratory conditions, such as asthma, are even more at risk of injury from inhaling wood smoke. This is not meant to scare you, only to make you aware of how important it is to limit how much smoke is produced from your fire.

Smoke is a nuisance as well as a health hazard, so taking the time and caution to ensure that your fire pit produces the minimal amount of smoke is the best way to get quality use out of it.

In summation, use these four tips to drastically reduce the smoke coming from your fire pit:

When building your fire, taking the time and care to properly set it up reduces not only smoke but also the time you would have to spend later tending to the flames. 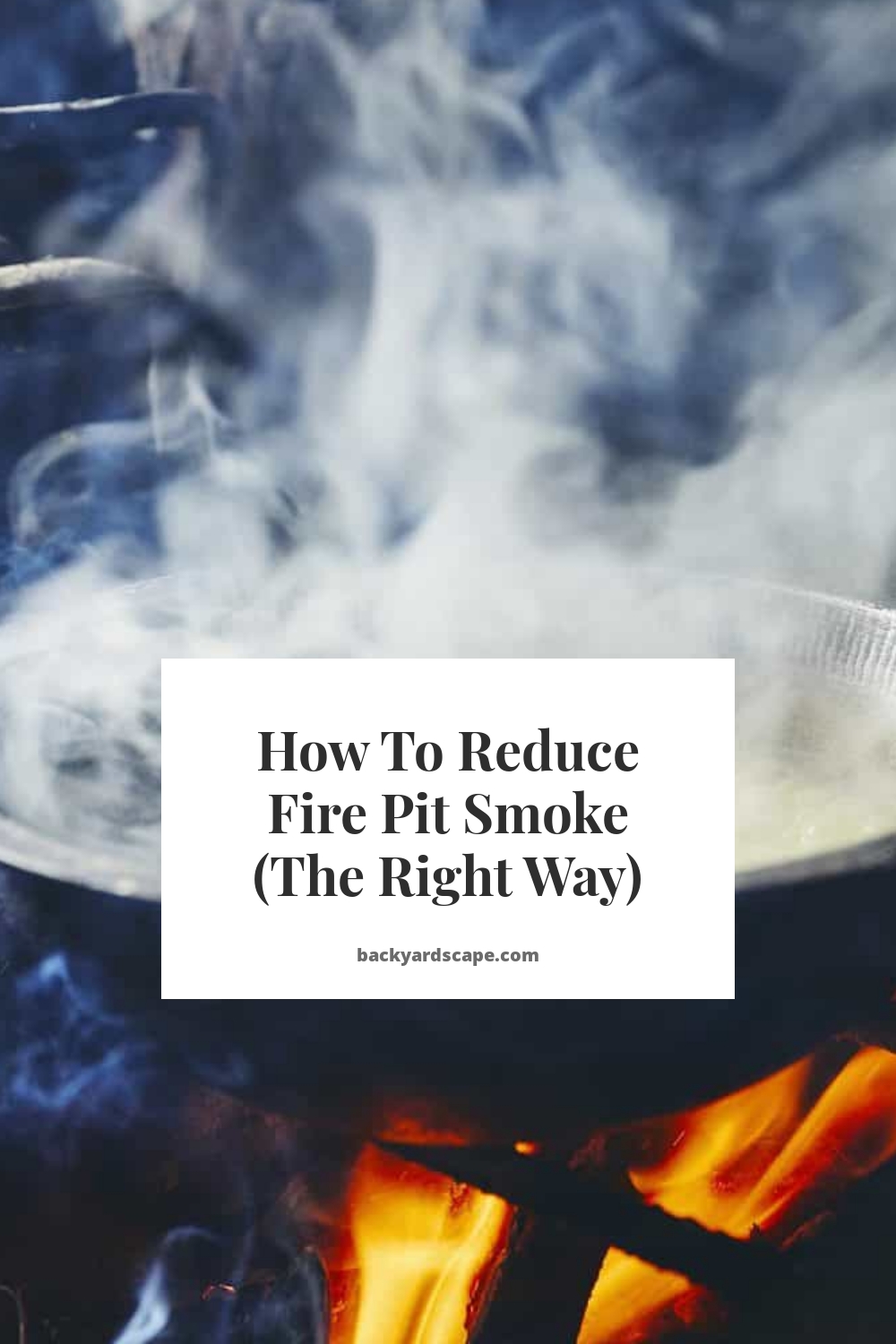