You are here: Home / Fire Pits / How to Remove Rust from an Outdoor Fire Pit?

Your fire pit is supposed to add beauty and appeal to your backyard landscape, but after years of use, it could begin to rust, and suddenly, which was once a feature is now an eyesore. Don’t worry! In most cases, you can restore your fire pit to nearly like-new conditions.

To remove rust from a fire pit, you can use a chemical-based rust dissolver or several natural methods including scrubbing with steel wool or using distilled white vinegar. After the rust is removed, the fire pit should be repainted and resealed to prevent rust from returning.

Removing rust from a fire pit is a simple process, but involves a good amount of work, time, and effort. To learn all the details of how to get rid of rust using a chemical-based rust dissolver and natural methods, and how to prevent rust from occurring in the first place, continue reading.

Before we get into how to get rid of rust, let’s talk about what rust is and what are the dangers. Rust is a common occurrence in items made of metal. We’ve all seen it, and it can cause some serious problems if left to run rampant.

Technically rust is iron oxide. Iron oxide is caused when iron reacts with oxygen and water. This reaction is called oxidization.  If a piece of iron or other metal has continual exposure to water and oxygen, rust is inevitable. It may not happen overnight. Rust can develop in a matter of day or years, depending on the intensity of the exposure and the type of metal.

How soon and how much rust your fire pit will endure is not only contingent on the type of fire pit you have, but also on where you live.

If the area where you live has any of these characteristics, your fire pit may get rusty more quickly.

All rust might look the same to the untrained eye, but there are subtle differences in the nature of how rust occurs in different environments. Even one object can have various types of rust flourishing on it at the same time.

How Do You Get Rid of Rust?

As long as your fire pit only has surface rust, it should not be difficult to remove the rust and refinish the fire pit. You could purchase a rust removal product like Rust-Oleum Rust Dissolver, but just be careful since these products tend to be highly toxic. They are bad for the environment and dangerous to your pets and children.

We also cover how to remove rust from outdoor patio furniture in a separate article.

To remove rust using a rust removal product, you will have to be a little more prepared. You should always follow the instructions that come with the product you choose as each product is unique in its formulation and will have specific instructions.

Below I have outlined a general idea of what you will need to do.

The Top Brands of Rust Remover

According to yourbestdigs.com, rust remover brands can be broken up into two main groups of products. There are rust removers that are metal focused and some that are considered to be all around rust removers. Refer to the table below to learn a little bit more about these brands of rust removers.

These products were rated by the website based upon their own claims and instructions. For example, WD-40 was tested for its ability to remove rust typically found on nuts and bolts.

While the rating system only means so much, most of their list’s rankings seem typical. Additionally, this table shows the diversity of specified product types in this market. No two products serve an identical purpose.

If you aren’t interested in using toxic chemicals to remove rust from your fire pit. You can try one of these methods recommend by the Farmer’s Almanac. There are at least 6 natural and easy to come by ways to remove rust.

If you use any of these natural methods to clean your fire pit, remember to rinse and DRY all surfaces completely. If you leave them wet, they will just rust all over again.

Restoring the Metal Fire Pit to Its Glory Days

Once you have successfully removed the rust either by toxic or non-toxic methods, you will need to reseal the fire pit and potentially repaint it as well if it is painted. This will protect it from getting rusty again and will make it look like new.

How to Prevent Rust

Although no fire pit is immune to rust, and it is likely that eventually, your fire pit may experience some rust, there are some measures you can take to prevent your fire pit from rusting and keep your fire pit looking great in your backyard.

You can help keep your fire pit from rusting by…

According to theruststore.com, rust converters differ from rust removers in that they react with rust to create a new substance that can be painted over while rust removers simply try to destroy and remove rust.

The second active ingredient, the organic polymer, provides a protective primer layer. The overall reaction converts rust into a stable, dark protective coating that serves as a very solid primer for both oil and epoxy based paints.

In other good news, rust converter can be utilized for almost any project involving rust. The chemical can be used on vehicles, trailers, iron railings, sheet metal, cast iron, farm equipment, fences, gates and any rusty iron or steel object for that matter.

But when rust converter absolutely should be used is when you are trying to fix rust on items that you are considering painting.

Preparing a Surface for Application of a Rust Converter

Good surface preparation is critical to enabling any rust converter to work properly and thus in producing a high quality outcome for your project. Here are the steps you should take previously to applying a rust converter product.

Most fire pits are made out of steel or other metals, and these are very susceptible to rust. Help prevent rust by cleaning it regularly.

Although it looks great the cast iron fire pit is slightly harder to clean because it involves a little more elbow grease. The process is still simple.

Copper fire pits are a great way to add visual appeal to your back yard. They are beautiful, but over time they will develop a greenish film over it which is caused by oxidation. Some people find this look attractive, and it will not harm the copper.

Gas fire pits are low maintenance, but they do need to be cleaned on occasion.  Before you start the cleaning process, make sure that the fire pit is not hot or even warm.

No matter which kind of fire pit you are using, make sure you handle the first signs of rust promptly. If the fire pit becomes too rusty, it could become permanently damaged and you’ll need to buy a new one. If you do have to purchase a new one, we have listed our favorite fire pits in a separate article. 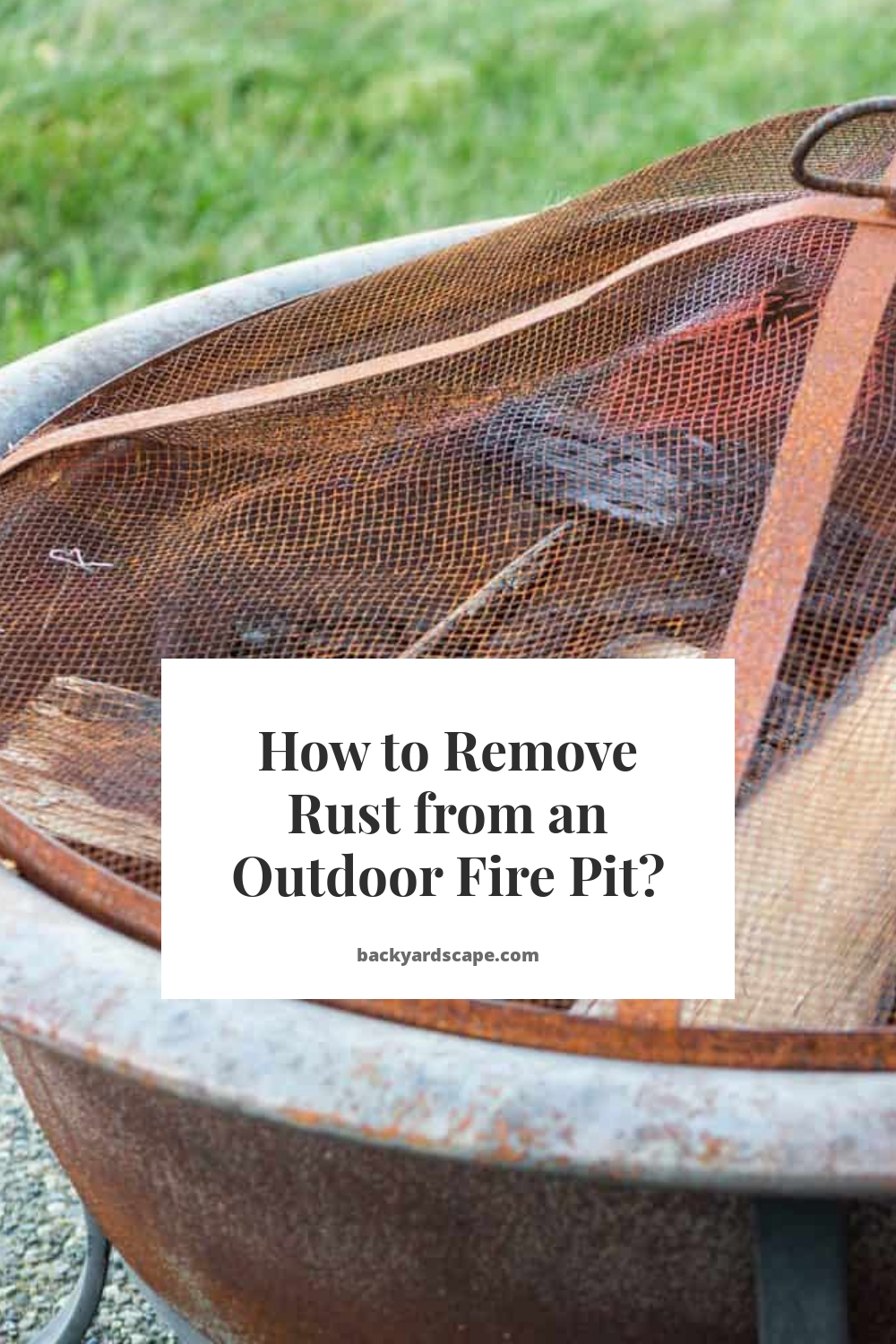