You are here: Home / Plants / Should You Grow Microgreens in Soil or in Hydroponics?

Hydroponic growth vs. traditional soil is an ongoing debate when it comes to plant growth. There are some plants that do better in soil and some in hydroponics. Microgreens are a hot topic in this debate since they’re harvested so soon after germination. The initial growth process is crucial; the best growth method is of the utmost importance.

You should grow microgreens in soil, as opposed to hydroponics. Soil is a superior choice for several reasons, including:

Benefits of Growing Microgreens in Soil vs. Hydroponics

Hydroponics is believed to make the process of tending to microgreens less involved; however:

that has proven to be a myth. In reality, each of these methods takes similar amounts of effort.

The only difference in effort is that soil requires more upfront effort. When considering maintenance, both methods pretty much even out in terms of effort.

Looking deeper than effort, there are many reasons why soil is a better place to grow microgreens. Here are some of those reasons.

Soil Can Always be Reused

Hydroponics is advertised to be fully compostable, and they are. However, there is a catch with regards to compostability. Hydroponics are biodegradable, but if left on its own, it will take years to start to decompose. To fully compost a hydroponic, you must be assisted with machinery.

Soil, on the other hand, can be reused over and over again. As soon as you pull a plant out of the soil, you can plant more seeds right there where you just harvested.

This goes hand in hand with the previous statement, but since hydroponics are not reusable, you will have to continue to buy more every time you attempt to grow. Over time, this will be significantly more expensive than purchasing a few soil bags that can be used indefinitely.

Of those who have tasted both microgreens from hydroponics and soil, the ones that come from soil appear to have a better taste. This is likely since they come off as more natural. This gives them the ability to fully mature as they were made to do in nature, which will then give it that authentic taste.

These plants have always grown naturally in soil. Sometimes, it is hard to reinvent something that will have the same taste and effectiveness as the natural plant.

When planting microgreens in hydroponics, they must be closely monitored and watered at least once a day. Soil, on the other hand, will give the plant the water it needs and even safely store some water in saturation so that it can remain hydrated for a long time.

With that being said, microgreens planted in the soil only need to be watered about every other day. With water less often, you should considered using hot tub water, to water you plants, as its a great way to recycle water.

Maintaining a good water level when growing microgreens in hydroponics can get tricky. They require more water than growing in soil, but at the same time, they can be overwatered. There is a small window of wiggle room when it comes to water levels in hydroponics.

Not all Microgreens Grow in Hydroponics

Some microgreens are just not capable of growing when raised in hydroponics. Some of these plants are only meant to be grown in soil. Two of the most notable microgreens that will not grow in hydroponics are sunflowers and beets. If growing either of those two plants, the soil is the only way to go.

What Kind of Microgreens Can I Grow in Soil?

Many plants are capable of producing microgreens. You can break them down into six different families.

Another thing about the flavor of these microgreens is they are very small but have highly concentrated flavors. This burst of flavor is what makes microgreens such a great addition to a meal.

When harvesting microgreens from hydroponics, they are likely to have a shelf life of 7 days at most. Microgreens harvested from soil typically have a minimum of 7 days but often much longer than that. This is certainly something to keep in mind when making this decision because you may often find yourself having to store microgreens for ten or more days.

Other Things to Note About Growing Microgreens in Soil

Clearly, there are plenty of positives in using soil to grow microgreens. But when you commit to starting your garden of microgreens, there a few things to keep in mind.

There are Health Benefits Related to Eating Microgreens

Microgreens do contain a high concentration of nutrients. Some of the most prominent are iron, zinc, magnesium, and copper. Aside from those specific nutrients, microgreens also commonly contain antioxidants that are very beneficial to the body.

As a result of microgreens containing significantly more nutrients than most mature greens, there are many diseases that eating microgreens will help prevent.

Diseases such as heart disease, Alzheimer’s, diabetes, and certain cancers can all be prevented if a healthy amount of microgreens are present in one’s diet. This is mostly linked back to the high concentration of vitamins, minerals, and antioxidants.

The One Time Soil is Not the Best Option

Some microgreen growing companies collaborate with restaurants and conduct a live sale, which is bringing the live plant into the kitchen to be harvested by the chef when needed. In this instance, growing on hydroponics is necessary. In just about any other instance, the soil will be the better option to grow microgreens in.

This is the fact that a live plant is being brought into a kitchen where food is being prepared. It would be a health code violation to have a pot full of soil in that kitchen. Fun fact, did you know some plants actually grow well in coffee too? you can also use hydrogen peroxide as well.

Growing microgreens can be a tricky but rewarding experience. Growing in natural soil or hydroponics is often one of the first questions that come into mind. When the pros and cons are laid out, growing in soil has significantly more pros than growing in hydroponics does.

One of the biggest pros that soil has is the fact that it produces better results. There are higher yields, and the crop tastes better and more natural. For those reasons, growing microgreens in natural soil is a better option than growing them in hydroponics. 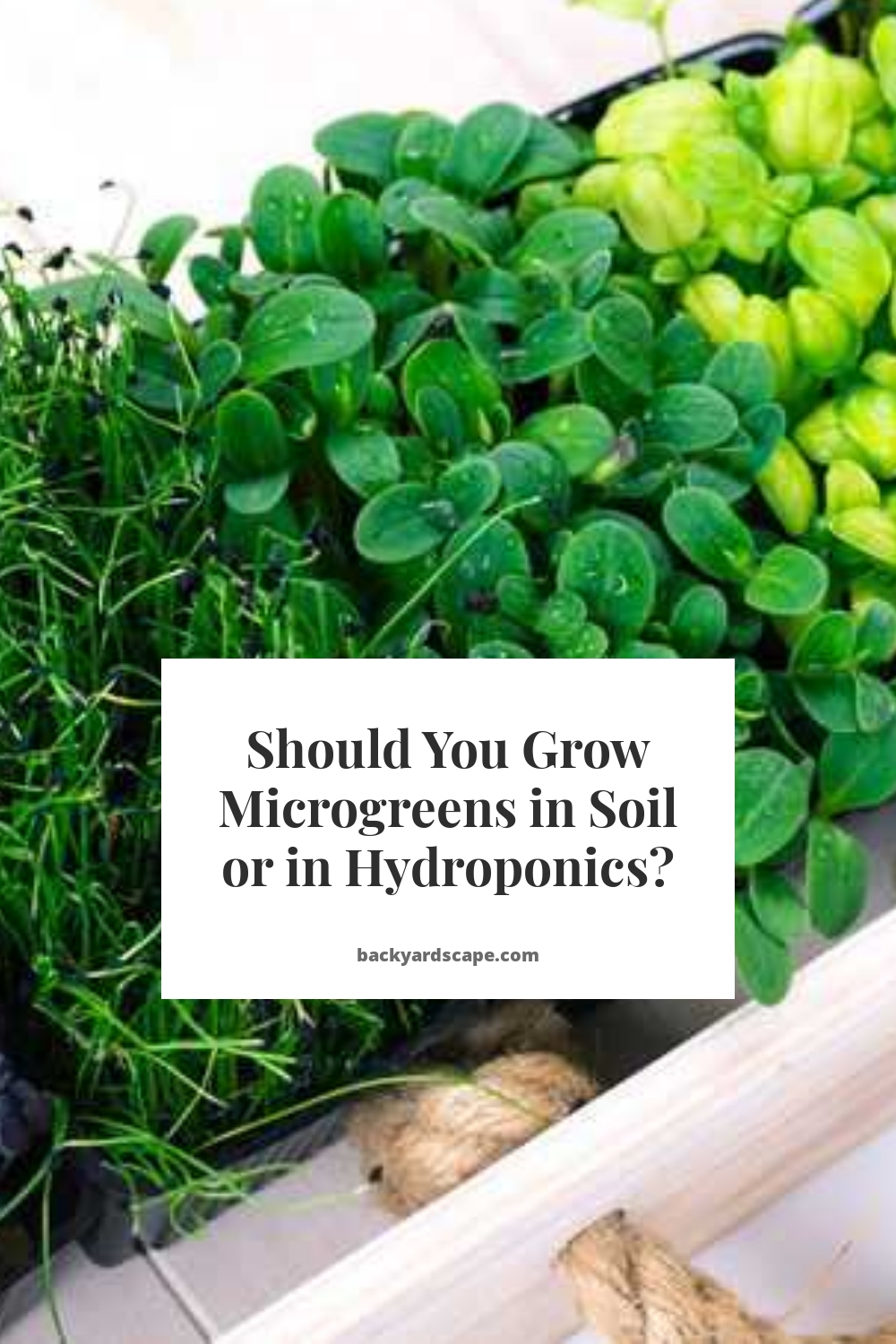