You are here: Home / Decks / How Long Does Wooden Decking Last

A deck is a wonderful addition to any backyard. If you’re looking at building a new wood deck, I’m sure you’re wondering how long will a wooden deck last.

A wooden deck will last 15-30 years depending on location and the type of decking used. To maximize the lifespan, a deck will need to be maintained regularly.

There are many different choices for wooden decking to build your deck. Decking board prices will largely translate to the durability and longevity of the decking material. It will also correlate to how much regular maintenance is needed yearly.

If you’re currently researching information on different wooden decking, we’ll go into detail about the most popular ones and which will last the longest.

We’ll assume the deck framing is made from pressure treated pine when talking about the different decking materials discussed below.

Decks Made from Pressure Treated Lumber

Southern yellow pine is mostly used for pressure treatments due to it’s strength. It has a Janka hardness scale of 870, which is stronger than cedar, cypress or redwood.

The biggest problem of pressure treated pine decking is its tendency to warp and crack when it dries out. It will need to be stained and sealed regularly to keep the warping and cracking at bay.

The other issue about pressure treated pine is that it isn’t as nice looking as all the other decking choices. However, it can be stained to look more like cedar or redwood without the cost of either.

Decks Made From Cedar, Cypress, Redwood

The next most popular wood decking is cedar, cypress and redwood. All three are considered softwoods with natural oils to protect the wood against insects such as termites. The main difference in each of the three are where they grow.

Cedar can be found in all areas of the USA, so it is widely found and used in all regions. Cedar has more of a reddish brown color. Just as cypress, the darker hue has more heartwood and should last longer than the sapwood.

With a Janka hardness scale of 320, cedar is the softest material out of the three. As such, it’s lifespan may be slightly less than cypress and redwood for a deck.

Cypress is mostly located in swampy areas of southern states and along the lower eastern coast.

Here in Florida, cypress is used more than the other two due to price and availability. Out of the three cypress is the hardest with a Janka hardness scale of 510.

Cypress has a orangish yellow hue. The lighter yellow hue is considered sapwood, which isn’t as durable or insect resistant as the darker heartwood.

Redwood can be found mostly in Northern California and Oregon. Prices will be higher and not available anywhere else. Redwood is well, red, likes its name though it also has some brownish hues as well.

Redwood has a Janka hardness scale of 420 which is harder than cedar. If you live in an area where both are abundant, redwood is the better choice.

Decks made with either of the three will last 20-30+ years. Decks made out of cedar, cypress and redwood will need regular maintenance as well but won’t check and crack like pressure treated pine.

Decks Made From Tropical Hardwood

Decking made out of tropical hardwoods are the longest lasting wooden decks. Decks made from Ipe, Cumaru, Tigerwood, etc. will last 40+ years. These woods are considerably denser than any of the woods above while also being naturally resistant to insects.

At the lower end of tropical hardwood decking pricing is Tigerwood, which has a Janka hardwood scale of 1850. Meaning Tigerwood is 4 times harder than redwood, but Tigerwood is only half as strong as Ipe.

Tropical hardwoods are considerably more expensive than any other wooden decking choices. Ipe being the most expensive to use with an average price of a 5/4x6x8 board costing approximately $80 dollars.

Compare that to a pressure treated pine board of the same dimensions costing $10 dollars with Cedar costing approximately $16.

While mahogany is considered a tropical hardwood, it does not have the same density of other hardwoods. It only has a 800 Janka hardness scale which is more in line with southern yellow pine.

Mahogany is a beautiful brown color and highly sought out for furniture but it’s decking price is high when compared to other tropical woods. One 5/4x6x8 Mahogany board costs $35-40, which is the same as a similar Tigerwood board which is twice as strong.

How Often Should Wood Decks Be Replaced?

Wooden decks should be replaced when they are no longer safe to use. If any of your framing members are compromised or rotten, you should replace your deck. If your deck framing is still in good shape, you can simply replace the decking boards.

However, you should closely evaluate the framing once the decking is removed to verify all posts, beams and joists are in good condition. This is especially true if your deck is close to the ground.

A deck that has proper ventilation underneath and made with pressure treated lumber framing members should last 20+ years. That same deck if it’s close to the ground with very little ventilation might last 10-15 years. Proper air flow is one of the biggest keys to a long lasting deck.

Things That Cause a Deck to Rot

There are many things that cause a deck to rot, but we’ll concentrate on the main factors. Most of these factors are controlled by you and the choices you make.

Not Maintaining Your Deck Regularly

Not keeping up with your deck maintenance can make your deck rot prematurely. If you leave standing water, mold and mildew on decking it will rot faster.

Leaving debris in between deck boards will trap moisture and cause the top of joists to rot. Not staining and sealing your deck will allow moisture to create cracks and splits in your decking.

Maintenance is the biggest key to keeping your deck looking good and having a long lifespan.

How Close to the Ground It’s Built

Ground decks are popular due to their simple design and because they look better than a plain concrete slab. Unfortunately decks built close to the ground do not last as long as other decks with at least 6 inches of airflow. Proper airflow around a deck is the second biggest key to a long lasting deck.

Anytime you choose to build a ground level deck, it is imperative to dig out dirt underneath and to add gravel to keep it as dry as possible.

Where Its Built – Exposure to Elements

Most decks are exposed to the elements but some are exposed to extreme temperatures. Whether it be blistering sun for long hours or soaking rain for long periods of time in the Pacific Northwest.

Both conditions above will cause a deck to degrade quicker. The UV rays from the sun will dry out the decking fibers causing it to crack. While the continuous rain and wetness will grow mold and mildew without enough sun to dry the boards out thoroughly.

If you have a deck built facing south, it will be exposed to a lot of UV rays. Oppositely a north facing deck will have lots of shade and be prone to mold and mildew in a high humidity area.

What Kind of Wood You Use

The type off wood you use for your framing as well as your decking will determine how fast your deck will rot. Treated lumber is used on the majority of deck framing members. Using a non treated wood is not recommended.

Decking as we’ve mentioned above will have different timeframes for when they start to breakdown and rot. The lowest price decking will not last as long as the higher priced wooden decking.

What Type of Stain or Paint is Used?

My preference between paint and stain, is stain because it soaks into decking. Paint will create a film on top of the decking but if not done properly can trap water inside the decking cause it to rot faster. Stain will soak into the board and allow it to breathe so water isn’t trapped in the board.

Can a wooden deck last 50 years?

Yes, if it’s made with Ipe and the framing underneath has appropriate airflow.

Can a hardwood deck last 25 years?

Yes, any of the decking noted above can last 25 years if maintained yearly.

What lasts the longest on a deck?

Your deck framing will last the longest since it isn’t exposed to the elements as much as the decking. But, only if the framing has proper air flow.

Why do most decks collapse?

Most decks collapse due to the ledger board not being secured properly to the house framing. If deck beams or posts rot prematurely, it cause a deck to collapse.

How do I prolong the life of my wood deck?

Proper routine maintenance is crucial to extending the life of your deck. Applying a stain and sealer combination will help your deck last a long time.

Do wood decks add value to a home?

Yes, if it’s in good condition and built with upgraded materials such as redwood, tropical hardwoods or composite.

Is it cheaper to repair or replace a deck?

Repairing a deck will be cheaper than replacing a whole deck. 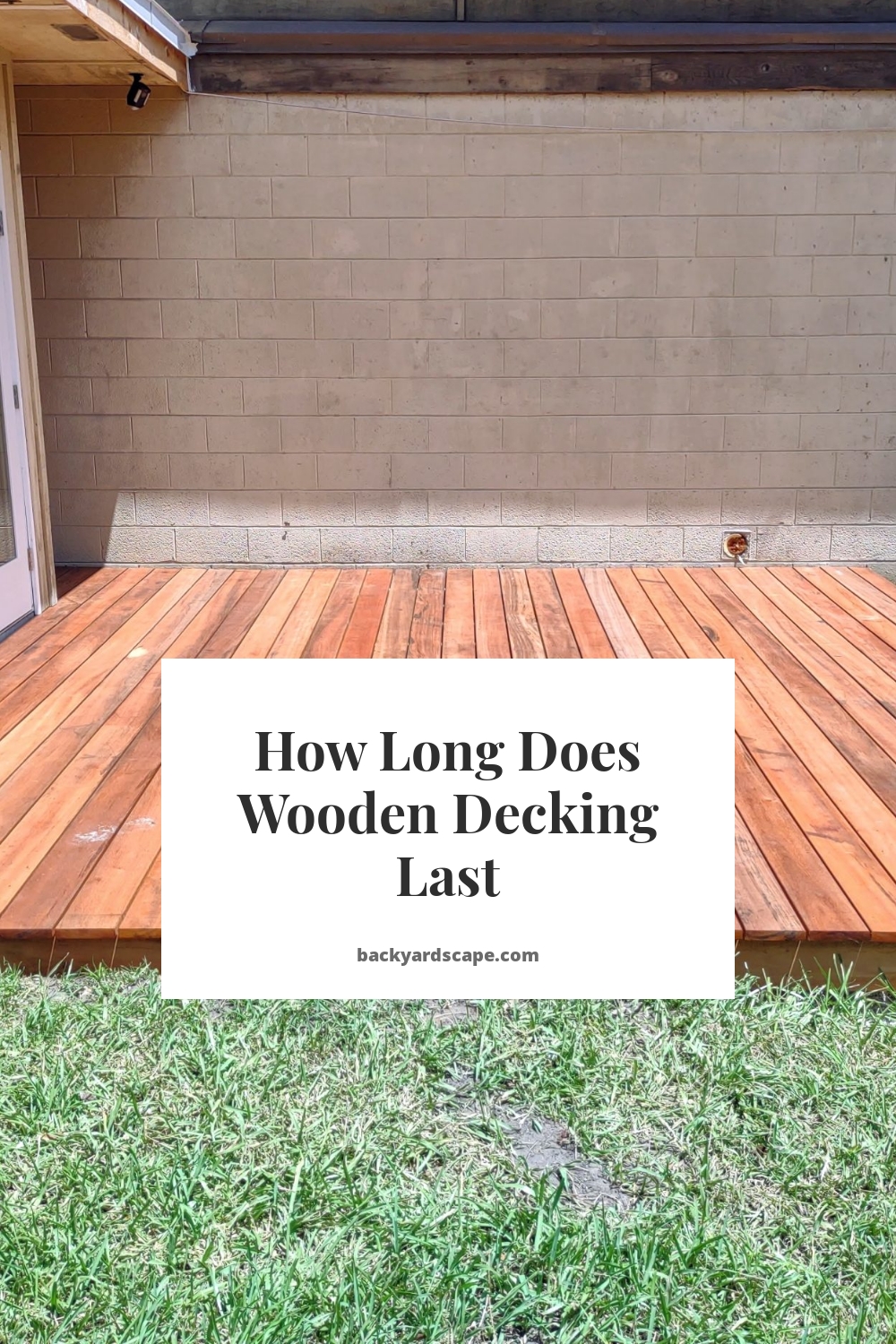