You are here: Home / Backyard Ideas / Are Clotheslines Illegal?

Overall, clotheslines are not illegal in the United States. The majority of states allow residents to dry their clothes on a clothesline. Fortunately, there are other ways to dry your clothes outside in states that do have a clothesline ban.

The following article is a more detailed explanation of which states have clotheslines banned and why they are banned. It also includes a few alternatives for drying your clothes outside without using a clothesline.

What States Have a Clothesline Ban?

The states with the most clothesline bans include:

Altogether, about 20 states have some restrictions on clotheslines. But the states mentioned above have some of the most bans for multiple reasons.

Technically speaking, states don’t have a complete clothesline ban that goes throughout the entire state. Different Homeowners Associations (HOAs) have different rules and bans depending on the area they reside in. The states with the most clothesline bans are usually the most picturesque, including those mentioned above.

Since the natural landscape of these states is a prominent element for things like real estate and tourism, the HOA organizations there want to keep the landscape looking good. Clotheslines can obstruct that, thus lowering the landscape’s value, which can be bad news for the HOA and the residents there.

However, there is some argument that any HOA organization banning clotheslines is acting unlawfully. As a result, clotheslines are somewhat allowed by default, so the bans aren’t set in stone by law. However, it is recommended that you double-check with the HOA in your neighborhood before setting up a clothesline.

Why Are Clotheslines Banned?

The main reasons that clotheslines are banned include keeping the landscape picturesque and clotheslines obscuring neighbors’ views. These issues can be solved easily if residents follow a few rules set by the HOA organization in their area.

Even though clotheslines serve a purpose, they can affect how clean a residential area looks. The better an area looks, the higher its value is on the housing market. For this reason, HOA organizations prevent residents from using clotheslines in order to preserve the value of their neighborhood.

Another reason that clotheslines are banned is that they can obstruct neighboring views. One of the main reasons someone might purchase a house is for the view. Clotheslines can obstruct the view from a house, thus creating contention among the residents. But this issue can easily be solved by making sure a clothesline isn’t in the way of a window or obstructing a neighbor’s views.

Can You Dry Clothes Outside In The United States?

The Benefits of Drying Clothes Outside

There are many reasons United States citizens will opt to dry their clothes outside rather than with a dryer. A few reasons include:

Purchasing your own dryer or going to the laundromat can be get expensive depending on how many clothes you dry each month. On the other hand, drying your clothes outside can be very cost-effective and dry your clothes efficiently.

Using a dryer less often is also beneficial for the environment. Dryers contribute to a significant number of emissions since they use a lot of energy to dry clothes. Drying clothes outside prevents more emissions from getting into the air, thus benefiting the environment.

Lastly, clothes usually last longer by being dried outside since it’s a gentler drying method, same goes for cleaning your rug outside on a clothesline.

Clothes are tossed around in a dryer, and their color or designs can fade over time because of this. Drying your clothes outside prevents this from happening since the wind is much more gentle than a spinning dryer.

The most popular alternatives to using clotheslines include using a drying rack, drying rod or a retractable clothesline. Both alternatives are inexpensive and effective at drying clothes, and adhere to any regulations that might be set in your area.

Drying racks are small racks that are designed to hold rows of clothes. They are handy if you are unable to have a dryer, whether you don’t have space for one or can’t afford one at the moment. Drying racks can also be moved to speed up the drying process. For example, they can be placed in front of an air vent or a radiator, so the clothes get some air on them, drying them faster.

Another alternative to clotheslines is a drying rod. They are fairly similar to racks, only they hold one row of clothes. Drying rods can be hung anywhere, such as on your balcony or porch. They are wide and able to hold plenty of clothes, so they are still effective at drying your clothes in a timely manner.

Finally there is a retractable clothesline. You can use this anywhere as long as you have a place to install a hook opposite your clothesline reel. The line is not permanently installed so it should be okay in most areas.

Clotheslines are an effective way to dry your clothes while still being cost-effective. However, there are certain rules and regulations about their use that should be followed.

If the area you live in has a ban on using clotheslines, you can still dry your clothes outside using a drying rack or rod. Furthermore, you can still use a clothesline if it adheres to the regulations set by your local HOA organization in your neighborhood. 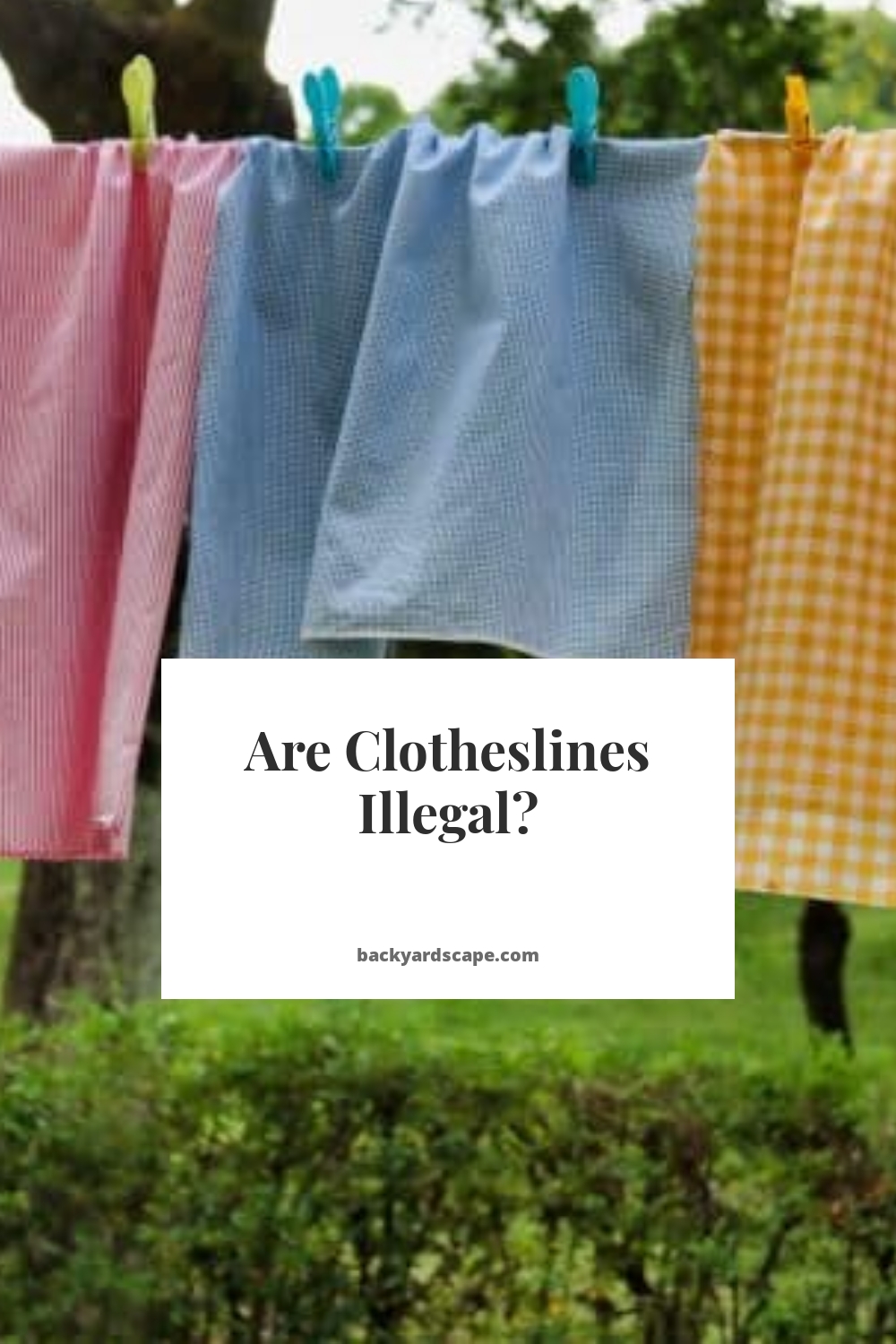